A LESSON FOR THE LIVING 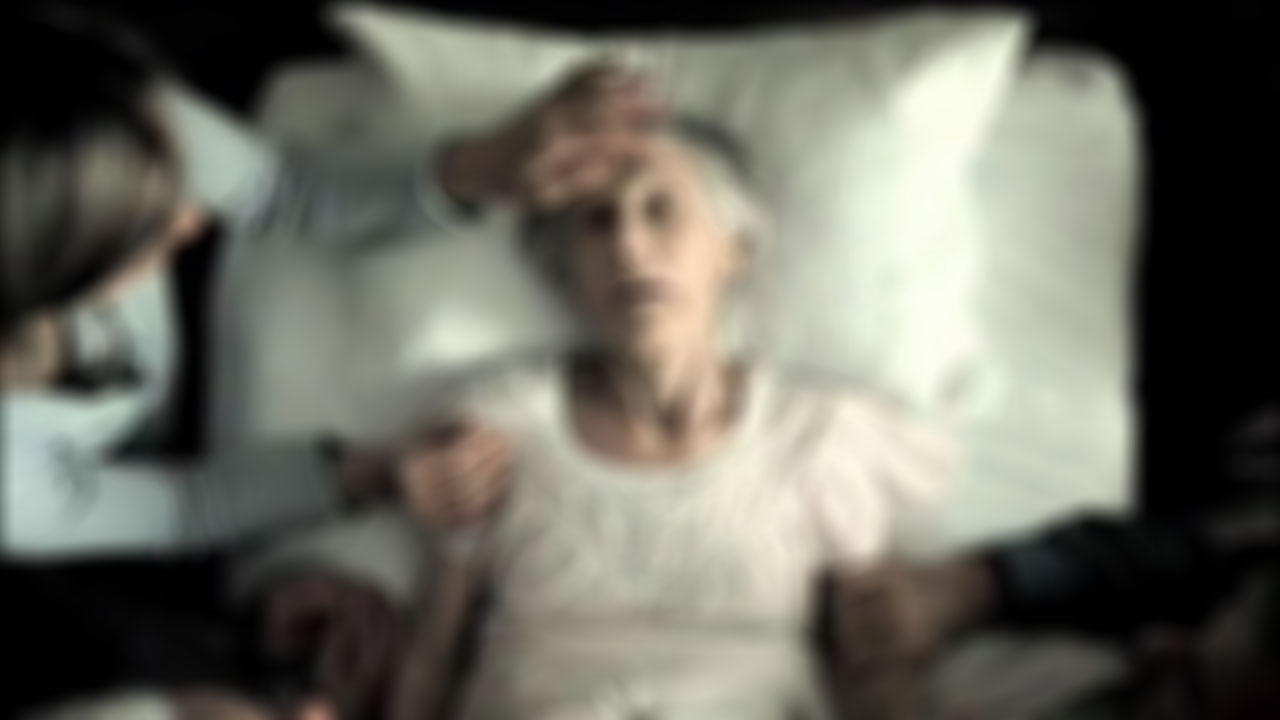 I wrote the following short story a few months after my grandmother (Ama), Mary D. Rakowski, passed away after a battle with esophageal cancer. Her effect on my life was more profound than any other person I have known, and her love, grace, and wisdom is something that I will cherish forever. I can’t wait to see her again, someday.

How much longer can this last?

This was the thought that kept seeping into my mind as I sat in my grandmother’s room at Francis House.  I sat listening, as I had when I was a child playing in the next room, while all these people chattered away about seemingly important things.  But as I sat there, a grown man with my own “important things”, I realized how small these people are.

Perhaps small is not the right word.  No…small.  That is what I meant.  They are small in their thoughts, in their perceptions, in their dreams, and even in death.

They sat there, talking about nothing while their sister, or aunt, or friend, labored to draw a breath on the bed mere feet away from them all.  Each breath harder than the last, her eyes staring into the face of God.  They all sat there listening to Aunt Betty’s tale of her violin lessons at age six.

I strained to control the expression of anguish that pulled at the muscles of my face as she recounted, in excruciating detail, the long afternoons in her parents’ parlor forcibly reciting mangled renditions of obscure classical pieces.  Aunt Betty even winced as she recalled the looks of pain caused by the auditory assault of her violin.

As I looked around the room I took comfort in the knowledge that everyone was as uncomfortable as I was.  Except for my mother.  Her expression surprised even me.

Her eyes conjured up scenes from a National Geographic special.  You know, the one where the lioness pounces on an injured baby gazelle and commences to tear its’ lungs out.  I decided in a flash that something had to be done with Aunt Betty, and quick.  The poor woman’s life was in danger and still, she prattled on about her support hose, apparently unaware of her predicament.

I quietly stood up and went to the door.  My Uncle Johnny was standing there staring at my grandmother as she struggled to stay in our midst.  He was sixty years away, somewhere on Hawley Avenue.  If not for the imminent danger his wife was in, I would not have interrupted his memory.  He looked so sad.

“Uncle John…maybe Aunt Betty would be more comfortable down in the day room,” I gently suggested.

“Betty, let’s give Rosalie and Monty some time here. We can go sit in the day room.” He crossed the room and handed Aunt Betty her cane.  She slowly stood, Uncle Johnny’s hand helping to steady her ascent.

My mother’s face eased a bit as she turned her attention back to my grandmother.  The others in the room must have felt the silent invitation to leave.  One after another they quietly left the room, after pausing a moment to place a hand on my mother’s shoulder.

Finally, we were left alone with Ama.  On the bed lay my grandmother, laboring to draw the shallowest of breaths.  She was at the end of a two-year battle with cancer.  She had fought hard and had enjoyed life almost until the very end.

We had been blessed with the time to say all that needed to be said.  Mom and I had even been able to discuss the funeral arrangements with Ama in the final days of her illness.  That was a conversation that will be with me for a lifetime.

Our family was a long-time customer of Farone & Sons Funeral home, up in the adopted neighborhood of the family on Court Street across from St. John the Baptist Church.  Having a wake or funeral at Farone’s was an involuntary response that no one in the family dared dwell on.  So, since Ama was near the end, and everyone in the family knew it, it was expected that she would be waked at Farone’s.  I had a different thought.

My best friend, Eddie, had died in a tragic car accident the previous year and I helped his family make the funeral arrangements.  His mother selected Hollis Funeral Home on West Genesee Street to handle the wake and funeral.  The services were some of the most beautiful and sincere that I had ever seen.  The personal attention given to the family by Charlie Hollis even quelled my usual unease at the thought of standing around for hours staring at a dead body.  What an obscene tradition it seemed to me.

So, after having experienced what I considered to be the best funeral one could have, I naturally suggested to my mother that we use Hollis when Ama died.  The suggestion evoked the expected cringe and shocked look on my mother’s face.  She said, “Oh, hon.  I’m sure Hollis did a wonderful job with Eddie, but our family has always gone to Farone.”

What she really meant was, “Oh my God, what will the family think?!”

I pressed the issue and eventually convinced mom that we should at least consider Hollis as an option.  She agreed but said that ultimately the decision should be Ama’s.  So later that day we wheeled Ama out to the kitchen and during our conversation, asked her where she would like to be waked.  I described Eddie’s funeral and the wonderful job that Charlie Hollis had done.

She said, “Oh, I remember Carm’s wake at Hollis.  She looked beautiful.  But really…you two can decide, after all, I won’t know the difference.”

Mom said, “But mom, we wanted to ask you because we know the family usually uses Farone.  Are you sure you don’t want to just go there.”

“Honest, Pooch, I don’t mind either way.  Hollis is fine, and like I said, it won’t make any difference to me”, she said with a slight chuckle.

Mom and I looked at each other across the table and smiled.  We had just discussed the single hardest topic in the world, and everything was just fine.  We were both thinking about how strong the little woman in the wheelchair sitting next to us was.

Once the rest of the family had cleared the room it was just Mom and me and Ama, still struggling to keep breathing.  Now that the conversation had stopped and we had no choice but to focus on the moment, both realizing that this was the end.

It was clear that Ama could not keep up her fight much longer.  Her eyes were fixed on some point in heaven, past the ceiling tile she was looking at, past the trees hanging over the roof, past the clouds in the beautiful blue August sky.  She was ready, and so were we.

The worrying and the sleepless nights had taken a toll on my mom.  But, she had done what so many caregivers think they can never do when the illness begins.  She had persevered and conquered her fears of watching her mother succumb to the terrible disease.  She had bathed her, and helped her go to the bathroom, and brushed her dentures, and helped her walk to the bedroom, and dressed her, and put on her makeup, and combed her hair.  All these things seemed impossible just six months ago.  And yet, now at this moment as this life was about to end, my mother was unconsciously beginning a new life.  A life to be lived – really lived – on her terms and no one else’s.  She had learned a valuable lesson but paid a tremendous emotional price.  Life is funny that way.

Mom and I sat on opposite sides of the bed, each holding a hand of the mother and grandmother whom we both loved so deeply.  We talked casually about the last few months and even laughed a little about some of Ama’s funny habits.  It seemed strange but good to sit there laughing.  Better that Ama hears laughter in her last moments on Earth, rather than tears.

The nurse entered the room and stroked Ama’s hair and checked her pulse.  The grave look on her face betrayed the obvious bad news.  The nurse said, “I don’t think it will be too much longer, she is ready to go, but she is hanging on for something.”

My arrival that morning was a matter of hours after the phone call from my mother the night before.  I flew from my home in Chicago to be with her and Ama in Syracuse.  It was an eerie recreation of the scene ten years before in a hospital room in Florida.  The hours sitting next to my Papa waiting for his brain to realize the rest of his body was already dead would always be with me.  It was my first up-close encounter with death, and it was both horrible and fascinating.  The idea that one moment I could reach out and touch this person’s hand and they could feel me and know that I was there, and somehow the next moment all that they had been, and known, and done was ended.  All they had seen and felt was forever lost to this world.  Whatever they were to take with them was locked up in their soul, where no mortal could touch it or ever again know its beauty.

Mom had not expected Ama to last through the night, and when she had, we all assumed that Ama somehow held on so that I could be there with her.  Although we never talked about it much, Ama knew how deeply it had affected me to be with Papa when he passed away.  I think she wanted me to have the benefit of her death experience too.  She, like so many people on the verge of death, must have had an instinct about the meaning and power of death.  There must be an irresistible desire to share the experience with those to be left behind.  It is a lesson much too powerful and profound to squander.

My mother’s lesson was no less profound.  We sat there watching the physical struggle of simply taking a breath, knowing that Ama was waiting for something.  But what could it be?

I remember we were talking about Aunt Betty’s performance and how totally oblivious she can be to the situation around her.  At that moment Mom started to tell me about the greatest lesson she had learned throughout the course of Ama’s illness.  She acknowledged that for most of her life she seemed to be waiting for something or someone.  This theme of impatience had caused her difficulty at work, in relationships, in the family, and with me.  But in the end, she realized that in her role as caregiver, she had learned patience.

“You know it’s funny”, Mom said in with a smile through her tears.  “Right to the end, she is trying to teach me patience”.

I nodded and smiled.

And at that very moment, Ama opened her eyes, took one last long breath, exhaled slowly with a genuine smile on her face, and then, was gone.  Her point had been made and the lesson was complete.

We looked at each other across the bed, me and my mother, and did what we never dreamed we would do at the moment.  We laughed.

7 thoughts on “A LESSON FOR THE LIVING”