Ah…Napoli! I’m not sure what it is about this easily forgotten jewel of Italy, but there is an essence…a quality that I like. Unlike other tourist cities in Italy like Rome, Milan, Venice, and Florence, Naples is not pretty or shiny or covered in gold leaf and bright colors. No, Naples is dirty, noisy, crowded, smelly in some places, and lacks that particular snobbish sensibility that so many European cities have.

Instead, Naples is real. Real people walking on real streets, going to real jobs, doing real life. Right there mixed in with a fair number of tourists. There is almost no pretension among the Napolitan. They dress badly (by Italian standards), drive like maniacs, curse out loud at tourists, and are not afraid to tell you that you should tip. The cab drivers talk to you in whatever broken English they can muster. The waiters will stare at you with a look that screams “Hey, hurry up I gotta turn this table and feed my kids.”

Even the tourist attractions are somewhat haphazard and slapdash. The National Museum of Archaeology (billed as “the most important archaeological museum in Europe”) was frankly a bit of a let down. Sure they have some amazing statues, mosaics, and artifacts of all kinds from the Roman and Greek eras, as well as some really cool stuff from Pompeii and Herculaneum. But the exhibits were pretty thin, and the curation left a lot to be desired. But even so…I loved it. Staring at someone’s cereal bowl and oil lamp from 2,000 years ago is pretty cool!

Naples is blessed with a beautiful coastline and a huge and perfectly crescent-shaped bay. The views of the infamous volcano Vesuvius are breathtaking. The water is sparkling blue, and you can see Sorrento across the bay and the Island of Capri. And yet…they haven’t built a stunning yacht club, or overpriced swanky cafes and restaurants along the bay. No, instead the Napolitans prefer cheesy snack & gift stands and gelato and burger joints. Go figure. 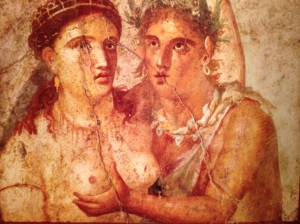 This is my second trip to the area and I must say, while this trip is very different from a week on the Amalfi coast (about 30km south of Naples), I just love it. There is something about this part of Italy that feels comfortable, familiar, and homey. If you’ve never been and dream of a trip to Italy some day, don’t overlook Naples and the Amalfi region. You’ll be pleasantly surprised.