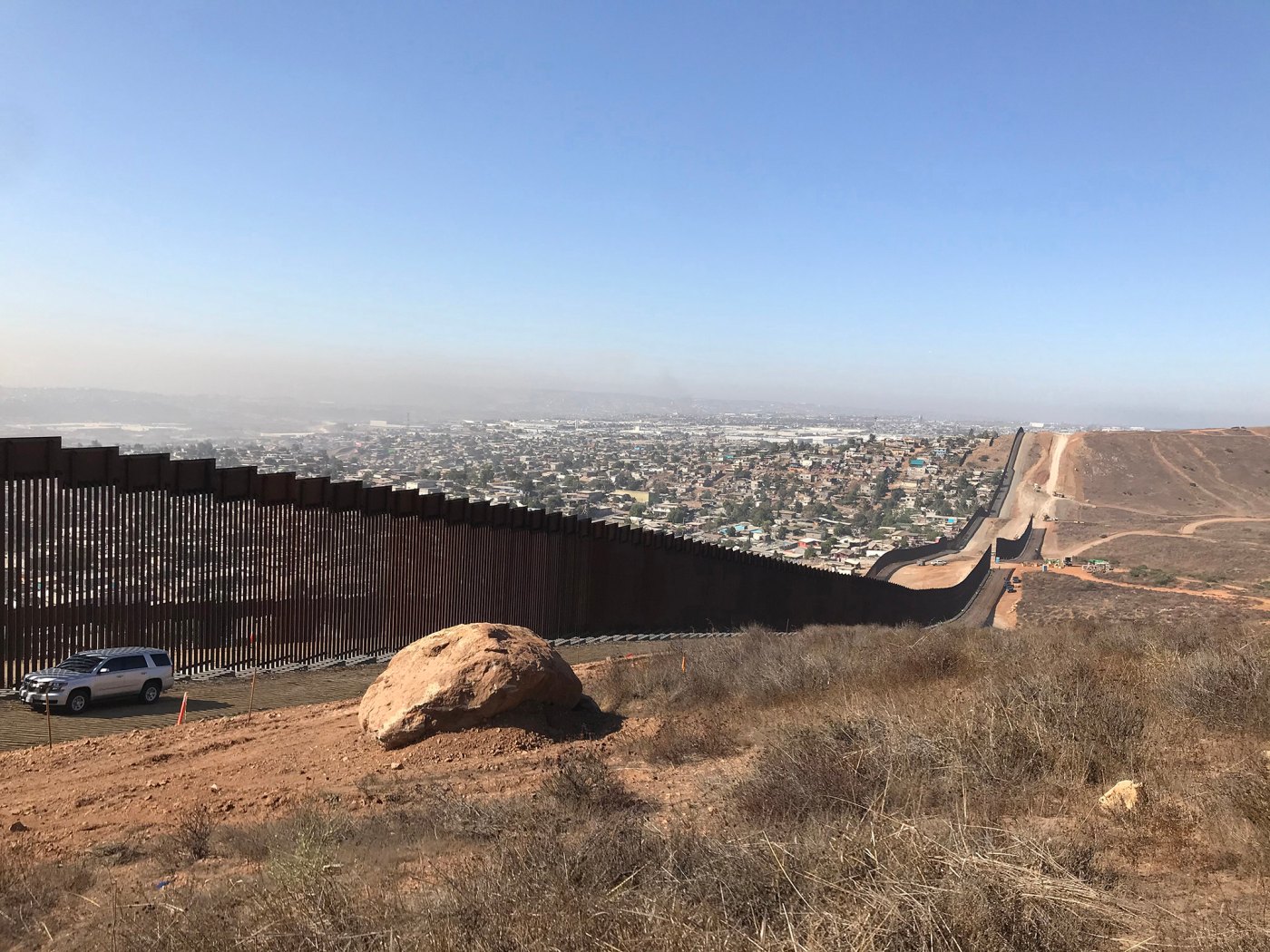 While there are many gaping holes in our immigration system, none gets as much attention as our southern border with Mexico. It is no wonder that the current crop of presidential candidates focus so much of their time on the topic.

In my first essay, I made the bold statement: “Mexico isn’t going to pay for the wall, and we’re not going to deport millions of people and break up families. If you think either one is a good idea, you’re not smart and probably not a person I want to hang out with.”

The vast majority of readers who commented agreed with that sentiment. Not surprisingly, a significant number of people told me in a variety of colorful ways that we will indeed build a wall, Mexico will pay for it, and we will round up and deport every illegal immigrant (including their unwanted anchor babies) and send them back from whence they came. (These are the folks that I won’t be inviting over for a cookout anytime soon.) But let’s be clear about both of these notions—the wall and mass deportation. Even if we built a big, strong, beautiful wall from San Diego to Boca Chica, thousands upon thousands of illegal immigrants would still find their way into the United States. They will dig under, climb over, and drive through this fantastical wall (packaged in myriad creative ways). We would also see images of dead men, women, and children crammed into trucks, boats, and suffocated in collapsed tunnels paraded across our screens and newspapers (or maybe not). The death toll will be staggering and will be yet another stain on our national conscience.

It’s curious to me that none of the politicians who spit buckets of venom on this topic ever ask the one simple question that might point us to a humane and cost-effective solution. They never ask, why do so many people risk their lives to cross our southern border?

Even a cursory glance at the news coming out of Mexico reveals the glaringly obvious reason—Mexico is a horrifically dangerous place. Mexico is in the midst of what amounts to a civil war. Only it’s not a war between two opposing political factions, but instead it’s a war waged by drug cartels against the legitimate Mexican state and federal governments. The situation is made worse by the fact that Mexico is still undergoing a slow recovery from the Global Recession of 2009, has one of the highest poverty rates in the Western Hemisphere, and has a significant portion of its labor force working in the black market. The drug-related violence is so bad that it has actually resulted in a drop in the average life expectancy of the Mexican male population.

“Today’s overly restrictive legal limits on green cards mean that virtually all undocumented immigrants have no avenues for legal entry to the United States.”

While the government grapples with a bruised and battered economy, they are also struggling to maintain law and order in virtually every state in the country. Horrific murders, kidnappings, rape, torture, and assassinations of police, judges, and politicians is at an all-time high. Some communities are literally under the administrative control of drug cartels, the citizens either forced into service for or living in fear of the drug dealers. This is the reality for millions of people who just want to raise their children in peace.

Before we get too far into this topic, let’s agree on something: the United States has a problem with illegal immigration. Here are five quick facts from the Pew Research Center that anyone should be able to stipulate to when discussing the topic of illegal immigration:

Some people will argue that anyone wanting to flee Mexico should simply come to the US via one of the established and legal immigration pathways. That sounds great on paper but the reality of legally immigrating to the United States is difficult for everyone and impossible for many. The American Immigration Council states, “Today’s overly restrictive legal limits on green cards mean that virtually all undocumented immigrants have no avenues for legal entry to the United States.”

When you consider the violence, the devastating poverty, and the failure of our immigration policy, can we really blame them for coming by any means they can?

Do you enjoy sleeping on clean sheets when you stay in a hotel? How about those clean toilets and showers…you like those? I bet you expect to have clean plates and silverware when you dine at a restaurant. How about all that gloriously fresh and tasty fruit that you drop into your NutriBullet every morning? I bet you like being able to afford that! And let’s not forget all of our golf courses, resorts, and parks with manicured lawns and lush landscaping. We simply couldn’t live with out that.

If you enjoy any of that then you are huge fan of illegal immigration. And you support it with your dollars every time you go out to dinner, stay in a hotel, or enjoy a round of golf. Now those of you who are already angrily typing a response to tell me how awful and racist the previous paragraph was, please take a deep breath and back away from the keyboard. Could it be considered promoting a stereotype? Sure. But take a look around. The jobs I described are jobs that are disproportionately filled by Latino immigrants. I don’t know why, but it is what it is.

Like it or not, the harsh reality is that our economy requires a continuous source of cheap, unskilled labor. Entire sectors of our economy depend on it.

So if we need these laborers but we seemingly have no political will to implement a more modern, rational, and fair immigration policy, what then? Frankly, I have no idea. I do believe that anyone who entered the United States illegally should face some kind of penalty. Many ideas have been suggested but I support those that include some combination of fine and payment of back taxes, but that ensures a path to citizenship—even one that is considerably longer than if they had entered the country legally. I feel strongly that anyone who comes to the US, works hard, and pays their taxes, should have the ability to live the full American experience with all the attendant rights and privileges. But this all seems a long way off.

Until ‘we the people’ make immigration reform a priority and force our elected officials to do something about it, I suspect we will continue to argue incessantly and watch the situation get progressively worse.

Here is what I do know. Regardless of who wins the next presidential election, the United States is not going to round up and deport 11.3 million undocumented workers. Such a plan is not only utterly impossible to implement from a logistical and financial standpoint, it is immoral and would permanently damage the standing of the United States in the eyes of our allies, and confirm the propaganda spread by our enemies.

Can you imagine the images of parents being forcibly removed from their homes while their children (many of whom are legitimate American citizens by right of birth) stand screaming and clawing at ICE agents as their mothers and fathers are dragged away in handcuffs? What would such a program do to the psyche of our nation? What kind of society would such a crass and inhumane policy birth?

No, we won’t deport 11.3 million people. So let’s stop saying that we should and that we will. Such statements are effectively lies and do nothing to advance the cause of solving our genuine immigration problems. And it diminishes us as a people.

We also are not going to build a wall from the Pacific Ocean to the Gulf of Mexico. While it may be technically possible, it would be a complete and utter waste of valuable resources. It would fracture the longstanding partnership with Mexico, damage our relations with Canada, and diminish our standing as the moral, cultural, and economic leader of this hemisphere. And frankly, it would do very little if anything to stem the flow of illegal immigrants across our southern border. As with so many utterances of the political class, this too is just hand-waving and theater intended to distract us from the simple fact that our elected officials have failed to act on meaningful immigration reform for more than thirty years.

As a Christian, I am appalled at the lack of compassion and concern shown by my countrymen and my brethren in the faith for the plight of the Mexican people (and many others). If the church can turn a blind eye to such outlandish and immoral policy suggestions—or in many cases support them—then we have surely lost our soul as a nation.

In the end, all I can do is carefully examine my attitudes and respond accordingly. The Bible I read tells me to love my neighbor as myself. Where I live, my neighbors are people from all over the world. I don’t know their immigration status nor do I care. My only responsibility is to love them, live in peace with them, and serve them in whatever way I can. That’s what Christ taught and it is the only response that has eternal consequences.

It is my sincere hope that we can change the way we think about the millions of hard-working undocumented immigrants, many of whom do the jobs that no one wants. Let us see in them an echo of our own ancestors who came to America for a variety of reasons, but  all in the hopes that they could live peacefully and prosperously in this great nation.